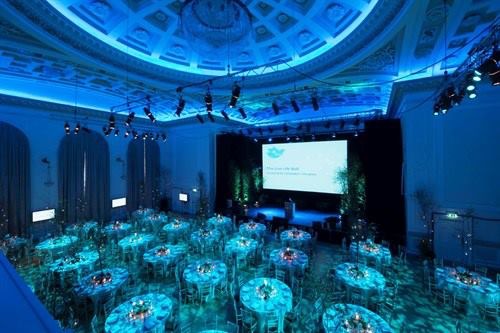 This year World Championships medallists Ross Murdoch and Andrew Mullen were among many people in Scotland’s wide aquatic community recognised at the 16th Scottish Swimming Awards, held at the Assembly Rooms in Edinburgh on 19 September 2015.

In recognition of his superb performances this summer in Kazan Ross Murdoch was presented with the Nancy Riach Memorial Medal. Murdoch won bronze in the 100m breaststroke final in a new Scottish Record time of 59.09. He also earned a Gold Medal as a member of the 4 x 100m mixed relay team who achieved qualification to the finals from the heats.

Murdoch’s University of Stirling team-mate, Duncan Scott, was also recognised at the event, winning the WG Todd Prize and Cup for Junior (male) Athlete of the Year following his medal success in Kazan and his outstanding performances at the 1st European Games in Baku where he was Team GB’s most decorated athlete.

Erin Robertson won the Junior (female) Athlete of the Year having enjoyed a very successful season breaking numerous breaststroke records and which culminated in her winning Gold for Scotland at the Commonwealth Youth Games in Samoa.

The event also recognised the contribution of the Local Authority and Leisure Trust Service Providers, who play a major part in supporting Scottish Swimming’s programmes and services and their vision that every person in Scotland should have access to quality swimming programmes, regardless of age or ability. One of the awards, The Service Provider of the Year, was awarded to Aberdeen Sports Village.

For 2015 the event has moved to the Assembly Rooms in Edinburgh, marking Scottish Swimming’s strong connection with Edinburgh and its strong relationship with City of Edinburgh Council who sponsored the event. Councillor Richard Lewis, who officially opened the evening said,

“Edinburgh has a rich tradition of aquatic activity delivered at our wonderful facilities by our strong club infrastructure and the City of Edinburgh Council is proud to welcome Scotland’s swimming community to the capital.

“We congratulate everyone linked to this event; athletes, coaches and volunteers for being such fantastic ambassadors for sport in Scotland.”

Maureen Campbell, Chair of the Scottish Swimming Board, thanked all involved in the aquatic community for a successful year. She said,

“The Scottish Swimming Awards once again acknowledges the outstanding successes achieved throughout the aquatics field from athletes and coaches to volunteers and local authorities, all of whom play an important role in leading our sport – a sport for all, a sport for life.

“Scottish Swimming has enjoyed great success over the past 12 months and we are delighted that there was so much to celebrate. 2016 is an important year for our athletes and we look forward to supporting them in their journey to be the best they can be in the months ahead.”

Pictures from the awards night can be found on Scottish Swimming’s Flickr site at www.flickr.com/scottishswimming from 12pm Sunday.