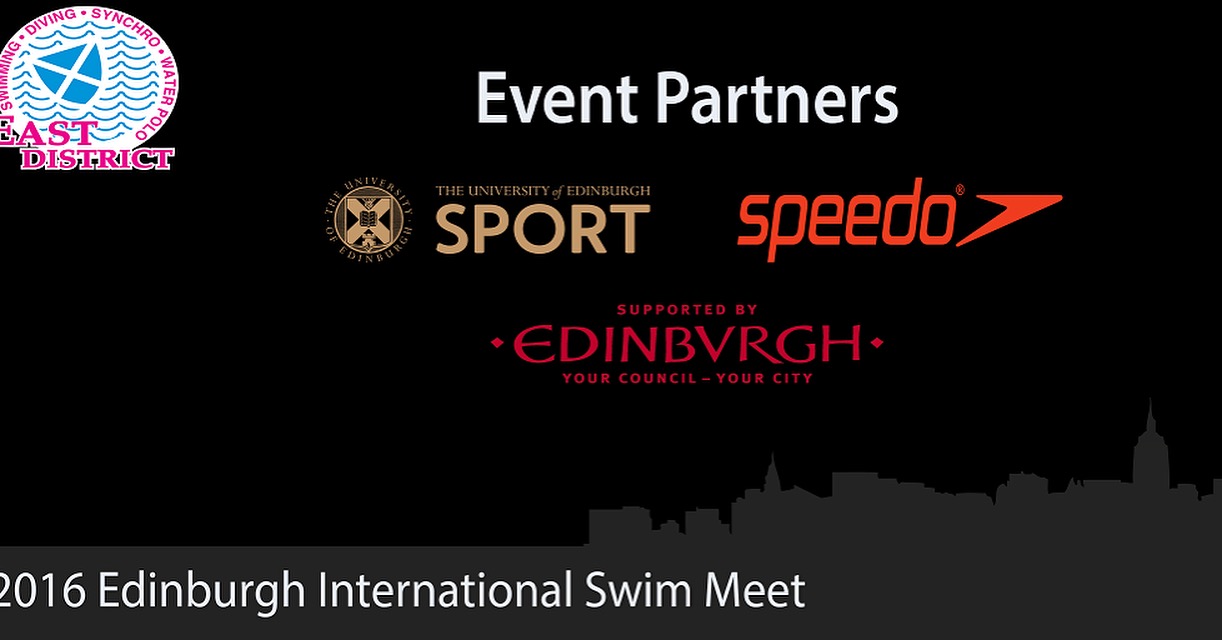 Some of the best swimmers from the UK and Europe will compete at the Edinburgh International Swim Meet (EISM) next month at the Royal Commonwealth Pool from 11-13 March. The meet is organized by SASA East District in partnership with lead sponsor the University of Edinburgh and swimwear brand Speedo.

Scotland’s best will go head to head with a host of other British and European stars. Homegrown talent Robbie Renwick, Hannah Miley, Duncan Scott, Ross Murdoch and Corrie Scott will all be there. They will be joined by an elite GB contingent that includes Derby’s Adam Peaty, London Aquatic’s Aimee Wilmott, Bath’s Siobhan-Marie O’Connor, Jazz Carlin and Lizzy Simmonds, and Plymouth’s Ruta Meilutyte and Ben Proud.

And some of the top European swimmers will attend including an eleven-strong Netherlands team boasting current double Olympic champion Ranomi Kromowidjojo and Inge Dekker who helped the Netherlands win relay medals at the Athens, Bejing and London Olympics. Denmark is sending 21 of its best young swimmers including world record holder Mie Nielson. Add in smaller groups from Greece, Germany, Ireland and Serbia and the scene is set for some exciting swimming. None more so than in the men’s 50m and 100m breaststroke where current world record-holder Adam Peaty will compete against world championship bronze medal winner Ross Murdoch and Serbian sprint world championship finalist Caba Siladji. With the 50m event being run as a skins event, where swimmers compete over several knock out rounds, it will be as much a test of endurance as of sprinting.

The men’s 100m freestyle is also too close to call. Four of the swimmers have broken the 49 second barrier this year and, should the winner not be drawn from amongst Sebastiaan Verschuren, Ben Proud, Calum Jarvis or Duncan Scott, then Robbie Renwick will hope he can steal it. The ladies 100m freestyle is another thrilling prospect – Ranomi Kromowidjojo, the reigning Olympic champion from the Netherlands in 50m and 100m freestyle, will hope to show her form ahead of Rio, but she will have to hold off challenges from Siobhan-Marie O’Connor, Denmark’s Mie Nielson, and team mates Inge Dekker, Esmee Vermeulen and Maud van der Meer.

Mie’s main focus will, of course, be on backstroke where she is a world short course record holder. Her main competition will come from Scotland’s Kathleen Dawson (swimming for home club Warriers of Warrington), Lizzie Simmonds and Jessica Fullalove. Mie swims in a Danish national team that includes Viktor Bromer, top seed in the men’s 200m butterfly where he was European champion in 2014, and distance swimmer Pal Joensen who won the Faroe Islands first ever world championship medal. To win in Edinburgh, Pal will have to defeat Perth’s Stephen Milne and Bath’s Jay Lelliot. All three have completed the event in under 15 minutes this year, with less than 0.5 of a second between their entry times.

Demand for spectator tickets is expected to be high. Details of the procedure to order tickets can be found at: http://www.sasaeastdistrict.org.uk/swimming/competitions/edinburgh-international